Selected pictures for the Press Release 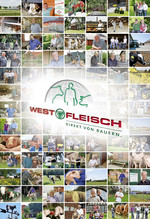 Westfleisch looks back on a year providing the most successful turnover volume ever. The German co-operative with its headquarters located in Muenster/North Rhine-Westphalia produced and exported more meat in 2012 than ever before – in fact against the trend in the meat market. Last year the turnover of the sustainably producing meat marketer increased to the record value of 2.475 billion Euros (+ 12.1 % compared to the previous year). "We realise not without satisfaction: Westfleisch held its ground among competitors in 2012", Dr. Helfried Giesen, Spokesman of the Executive Board, said at the annual general meeting in Muenster on Wednesday 12 June 2013. The price driven record result was though "also caused by the unprecedented high procurement price level for livestock", Giesen explained.

Westfleisch is Germany’s No. 3 meat marketer, ranking amongst the European top-5-companies in the branch. In future, the Group will even more clearly emphasize the sustainable production of meat and its direct origin from farms since the owners of Westfleisch are about 3,500 farmers in Northwest Germany. Via special cooperation contracts they ensure the supply for the company’s record meat total sales of 888,000 tons (+ 0.6 %) in year 2012. 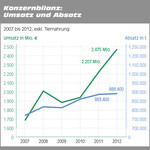 How powerful Westfleisch is, the Westphalian Group demonstrated in year 2012. Carsten Schruck, CFO of the Executive Board, pointed out to the members gathered for the General Meeting that the evident growth against the sector trend and the net profit, being satisfying compared to the recent year, were indeed notable. For pig and cattle farmers it was a good year, the annual average producer prices were ahead by 11.8 % of the recent year’s values. Westfleisch achieved a new all-time high with 7.3 million pigs for slaughter (+2.3 %).

After one and a half decade of uninterrupted growth in the pig slaughter business, the number of animals processed decreased in Germany last year for the first time since 1997. Compared to the previous year meat production declined by 159,500 tons (- 1.9 %) to 8.04 m tons. In contrast, Westfleisch recorded with 544,400 tons of pork a growth of + 6.1 %; the increase for beef was with 126,000 tons even higher at + 9.3 % in 2012.
Although in summer 2012, the BBQ season literally fell through the sales of self-service meat specialties and convenience products of the subsidiaries WestfalenLand and IceHouse rose by 8 %, the sales of both refining companies increased by 22 % to 434 m Euros. At the location in Muenster, expanded with a 15 m Euro Invest, up to 3,000 tons of meat can now be processed and packaged per week.

Against the meat sector trend, Westfleisch was also able to raise the exports: the Westfleisch Group sold more than 385,800 tons of meat abroad (2011: 373,200 tons; + 3.4 %). "Exports remain one of our turnover drivers", Giesen stressed in the Executive Board’s report. In 2012 Westfleisch sold a total of 280,000 tons meat to the EU (+ 2.1 %) and 105,800 tons to third countries (+ 6.9 %). "Export continues to be an important sales valve for German meat marketing", emphasized the Westfleisch CEO. That is because the per capita consumption of meat in Germany has declined to 59.5 kg (LY 61.2 kg) – a trend that probably will last owing to demographic reasons and the current Zeitgeist.
Westfleisch increased exports by 14.4 %, achieving therefore a rate of 33.4 % in value and 42.2 % in quantity. Giesen underlined the relevance of export: "Export is essential for a company that wants to stay successfully in the market." The export of meat ensured the profit of the Cooperative Group and therefore the domestic producers.

A gain of 8.3 % amounting to about 2.1 m animals was realized in the trade with fattening piglets, consolidating the position as leading German piglet marketer. For many years Westfleisch has specialised as broker of bulk piglet batches from the region ("Westphalian Passport for Piglets"), availing of a safeguarded health status.

Last year the Westfleisch Group invested more than 30 m Euros, among others in extension of the carcass classification (AutoFOM-III), in further upgrading the refining subsidiaries WestfalenLand and IceHouse Frozen-Convenience at Muenster as well as in a state-of-the-art processing company in Romania. For the current year 2013, another 30 m Euros have been included in the investment plan. At ColdStore Hamm 5,000 further pallet spaces will be built and at Gustoland, the group’s sausage specialities producer, process organisation and energy management will be further improved.

One of the consequences of the "price-driven record high" of the turnover transpired to be an impede for Westfleisch: gross earning and margin have declined so that the corporation’s result of ordinary activities with 11.5 m Euros is on the previous year’s level; but after tax and reserves the accumulated profit of 6.5 m Euros was 2 m Euros below the recent year’s result. CFO Schruck explained in the meeting: "Since the subsidiaries progressed slightly better the total result with an annual net profit of 3.4 m Euros in 2012 – after 4.5 m Euros had been attained in the previous year – is still very respectable."
The parent company closed the business year with a positive annual result of 2.7 m Euros (LY 7.9 m Euros). After allocation to the statutory reserves remains a net profit of 1.4 m Euros, which is also used for distribution of a 4.5 % dividend to members and shareholders. The Group’s equity position developed positively: in 2012 the owners equity ratio increased to circa 42.3 %, total assets grew by 5.5 %.
The special bonus for Westfleisch’s contract farmers will turn out slightly weaker than in the previous year: For BestSchwein and BestFerkel 20 Euro Cent for each animal, for TranspaRind and BestKalb contract partners 2 Euros while for sows for slaughter and calves for fattening 1 Euro will be granted.

"The Westphalian peasant family farms tend to getting larger", CEO Giesen noted at the general meeting, "they are vigorous and reject for good reason any distorted picture of industrial mass husbandry". The Board’s spokesman picked up the current public discussion about the significance of meat and emphasized the Westfleisch principle of sustainable economic activity. "Farmers have always known that they must not consume but only use their farm and resources in each generation", Giesen pointed out.

For its sustainable corporate strategy and pioneer role in innovations in the meat industry like the mission statement "Partnership for Quality" and "Aktion Tierwohl", the first animal welfare label range between standard and organic meat, Westfleisch has recently been honoured in Frankfurt with the "Meat Vision Award 2013", granted by the German trade press. With these innovations, Westfleisch has raised the bar for their own activities and has the degree of performance checked in neutral audits. Presently Westfleisch is working with partners in industry, commerce, and science as well as social groups under moderation of the QS GmbH (Quality and Safety of food) on an initiative of the branch to keep improving animal welfare. Giesen: "This solution must be feasible, communicable and payable for all parties involved."

Apprenticeship beyond own demand

Qualified and motivated Westfleisch employees, indentifying with the company, contributed a great deal to the record figures of the business year. The number of staff of the entire Group has increased to 1,916 employees (+ 56) end of 2012. Last year the Westfleisch eG employed an average of 808 staff members (+ 29), 88 thereof were apprentices in ten different occupations. Giesen: "Westfleisch is strongly involved in the education and training of junior staff."
Work-life balance is a particular concern of Westfleisch. Besides individual, tailor-made flexible working time models, all companies of the Group can address the "Familiengenossenschaft Muensterland" (family cooperative), co-founded by Westfleisch, if an employee is in need for a caregiver or assistant for young and old relatives.